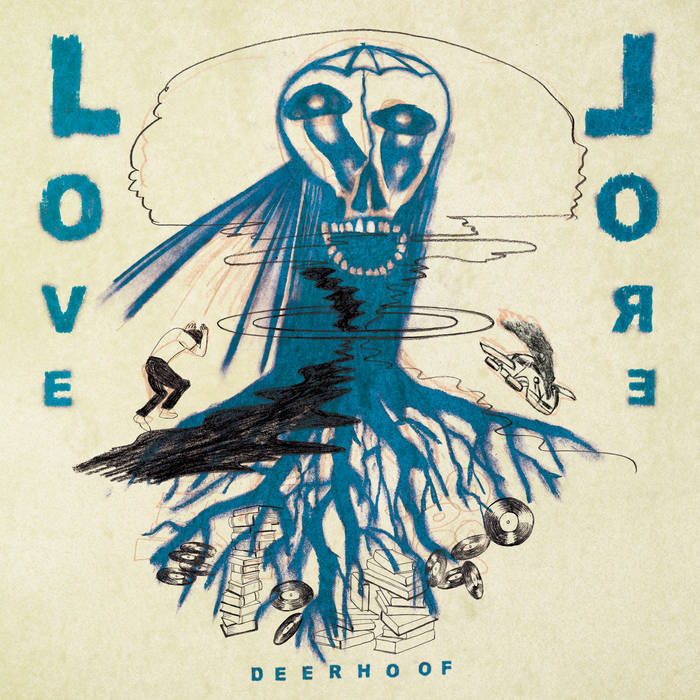 quasiotter this is funny and weird. i don't know most of the references and that is a fun mystery to me. Favorite track: Love-Lore 2 (Knight Rider/Raymond Scott/Mauricio Kagel/Eddie Grant/Gary Numan).

albinobone This album is an ingenious jigsaw puzzle of diverse musical influence held together by taut strings of raw musicianship. Appreciable on so, so many levels. The fact that it was assembled and memorized for one performance blows my mind. Stunning. I once sweatily and drunkenly hugged Ed after a show. I don't think he much appreciated it, but I wear it like a badge. Favorite track: Love-Lore 1 (Ornette Coleman/JD Robb/Voivod/Earl Kim).
more...

The Monk Of Funk ™

The Gains of Love-Lore’s Lost Futures

Everyone knows that phonography changed everything. If I were to point to the specialness of the late 1960s, it would not be to suggest that earlier moments of phonographic history—such as the global flood of proletarian and rural musics that rose up and swirled endlessly on wax in the years after 1925—were any less significant to the experience of the twentieth century, but rather simply to notice the cultivation of a new kind of listening, one that moved across the field of genre with relative ease and enthusiasm, and that—most importantly—put that stereo jockey into a new kind of relation to the “fine art” music that might find its way onto the platter: collegiality, equality, criticism.

There were plenty of precursors, of course (I think immediately of Charlie Parker’s brilliant interpolation of Stravinsky’s “Firebird Suite” into his solos on “Koko”), but a series of interlocking transformations—including the massive expansion of public education in the US and the UK, the perfection of vinyl as a medium and the transistor as a technology, the rapidly increasing bloat of the entertainment industries, the decolonization process in Africa and Asia, and the new social movements in what used to be called the First World—undermined the authority and permanence of those masters of the written score. You didn’t need to go to school, you didn’t need to take lessons from the maestro to join them as a certain kind of co-equal participant in the development of an “advanced” musical language. At the same time, the projects of modernity that had motivated and underwritten various accredited avant-gardes throughout the century had begun to come undone from the pressure of new historical subjects who told other stories of the destructive effects of European modernity and coloniality. Pan-European modernism has been provincialized, and global artists committed to social transformation are exploring zones that speak to other possibilities.

I was thinking about all of this around the time that Thomas Fichter invited me to collaborate with him on the curation of the Time:Spans festival in 2019. We wanted to think about the history of the avant-garde—or, more specifically, that slice of it referred to as “experimental music”—through many lenses, as practiced by many different kinds of subjects drawing on distinct yet frequently intersecting traditions. (In addition to Deerhoof, that mini-festival inside the bigger one also included work from Matana Roberts, Okkyung Lee, Raven Chacon, Olivia Block, and Sarah Hennies.) I had a great time tossing around ideas with Deerhoof and our old friend, the composer Luciano Chessa, who joined us for our earliest conversations. My first idea was to ask the band to perform a complete album, start to finish, but not one of their own. We thought a complete cover version of an old record by Mauricio Kagel or Luciano Berio might be fun. Ultimately, the band settled on a much better idea, which turned into the medleys that you hear on this release. I loved this solution because it highlighted the active role of listening, the participatory dynamic of the vernacular, and the almost pedagogical quality of musical arrangement: “Here is how we hear this one!”

That concert, in August 2019, in a small hall on the west side of Manhattan, was a special event that I will remember for the rest of my time. I suspect the other 180 people there had a similar feeling. In the first minute or two, I might have caught a fleeting glance from Satomi that wondered, “What have we gotten ourselves into?,” but if such a doubt did exist, it faded quickly. The concert was not brief but it went by in a dazzling flash; I am still amazed that these musicians—all of them, but especially Ed—memorized one hour’s worth of music for a single performance (that’s a lot of notes). At the time, I experienced both of these elements (Satomi’s doubt and Ed’s recall) as contributions to a greater treatise on risk: any real hazard requires uncertainty, demands focus, and invites a response. Hearing that program again, now as a recording, brings to mind nothing if not Sonic Youth’s 1999 record, Goodbye 20th Century, another album that I hold dear. While Sonic Youth worked from scores by Cage, Wolff, and other composers, Deerhoof takes a more vernacular approach, learning the music of their predecessors by ear, straight off the record, and then revising it in practice. If Sonic Youth cultivated a certain reverence for the ancestors, Deerhoof seems both more skeptical and less respectful—a measure, perhaps, of how the last twenty years have affected our relationships to the modernist projects of futures past.

Please note: this is a free download. If you choose to give more, it is a donation to Deerhoof... so they can continue making music. But please feel no obligation to give.