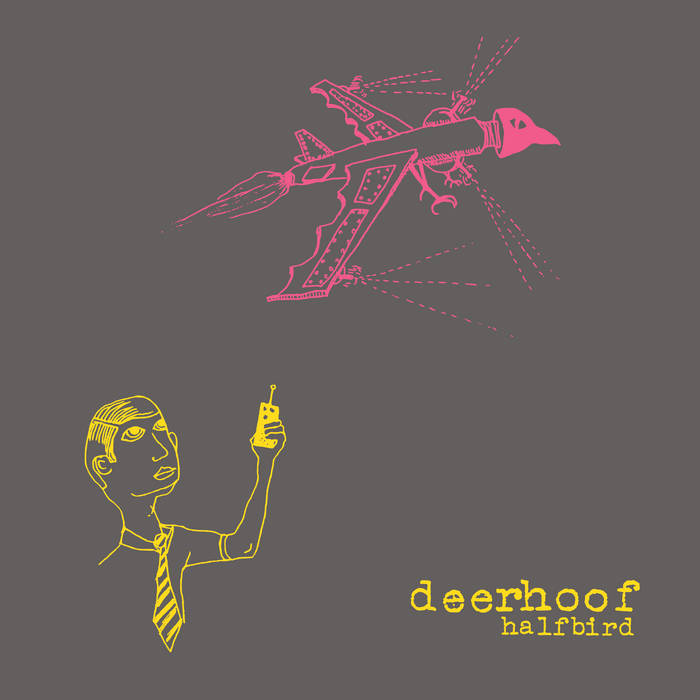 Slut Aus Nord Just amazing. Childlike innocence in the approach to non-theoried music and fairytale lyrics... But not childish, not sloppy, not slapdash. Found Deerhoof today and now lost in that "science fiction" land. Favorite track: The Man The King The Girl And The Spider.

willdurkee7ams Greg & Satomi: what was going on in your heads when you were making this album... along with Rob Fisk?? Especially for tracks Halfrabbit Halfdog & Trickybird? In terms of lyrical content...I’m so interested and wanted to ask during the Reddit ama but I don’t have an account... This album is so great, thanks for making it exist.~
-Will Durkee
wdurkee7@gmail.com Favorite track: Halfrabbit Halfdog.

“Actually Halfbird was going to be our second album,” Saunier says. “The reason Halfbird came out as our third album instead of our second is because it took four years of tinkering on the four-track to get it ready for release.”

Halfbird represents the apex of Deerhoof’s struggle to pull hi-fi sound out of lo-fi gear. “Two of the three LPs that are being reissued now were recorded on the same broken Tascam four-track cassette machine,” Saunier shares. “It was so much trouble to even get it to record a sound. It would keep switching off because the power thing was broken and the inputs didn't work.”

“When our first album completely bombed, we were determined to do a better job,” Saunier recalls. Though Deerhoof were stuck recording on the aforementioned broken Tascam, Saunier valiantly tried to improve other aspects of the recording process. “We borrowed some better amps and microphones. We tried to do it right. I'd read something in a magazine about how your supposed to mic a bass drum and we’d try it. We recorded all the loud songs in one day with a couple borrowed microphones in a borrowed room. We recorded all the quiet songs in the front of our apartment while our roommate wasn't home. It was all one take per song and that's what we had to work with.”

But Halfbird would spend several years mired in post-production limbo. “We gave up on it so many times, and then came back to it thinking maybe it could work,” Saunier says.

Matsuzaki recalls Saunier’s obsession with salvaging the project. “For months Greg would sit in front of the Tascam four-track all day long just touching all these knobs, Matsuzaki says. “I’m from Japan, and I thought there's so much technology out there, I was like, 'Wow, Greg really believes in this machine.’ It was a mystery to me and I wondered, ‘Why don't we just buy something else?' Greg tried so hard. The machine itself showed wear from how much Greg was working with it.”

“I’ll never get those years back that I spent on that Tascam,” Saunier laughs. “I was literally starting to experience sanity issues from obsessing over that tape machine.”

Eventually Deerhoof succeeded in bringing Halfbird to life. But by the time the album was issued in 2001, Saunier says that Deerhoof was in a difficult place. “There was an existential crisis every week or so. In the four years it took to complete Halfbird Rob and Kelly quit, and it seemed like the band was over. It had become such a pain, and we were so amazingly unsuccessful in everything we attempted. All of our CDs lost money, all of our tours lost money, and this was happening when the first of San Francisco's tech booms was starting and everything was getting really expensive. Rob started thinking, 'What in the world am I doing?' We all had those doubts constantly. It seemed like a silly way to be wasting your life away, huddled over a four-track machine and playing to the same eight people at every show. It felt like it was going nowhere, and meanwhile the cost of living was skyrocketing.”

“A new phase of the band was about to start,” Saunier reflects. Deerhoof’s next album Reveille would receive remarkable critical acclaim, being included in 2002-best-of lists published by Pitchfork and the New York Times. Deerhoof were on their way to indie rock glory and fame. “Like anybody's life, so much of Deerhoof’s story has been built around accidents and coincidences,” Saunier shares. “Everything just kept falling into place in a way that allowed us to get things done.”

Both Matsuzaki and Saunier feel Deerhoof’s early work deserves a new listen. “I felt lucky this year to be able to go back to those first three records and hear what they actually sounded like,” Saunier says. “When those records are mentioned they're usually referred to as our lo-fi/noise albums. So it was really great for me to hear those records again and realize they were every bit as poppy as anything we've done since.”

“I think these three albums are Deerhoof's most raw and real albums,” Matsuzaki adds. “These albums are almost like science fiction to me. We had all these fantasies about what we wanted to do musically and we were struggling to meet that reality. But I feel like the labels and people we worked with believed in our weird fantasy. I still believe in that fantasy and after 25 years I still like these albums. I hope people will enjoy too.”